2018 was an historic year at Temple College as the college won its first national championship in softball and prepared to welcome a new president. Here are some of the highlights from the year: 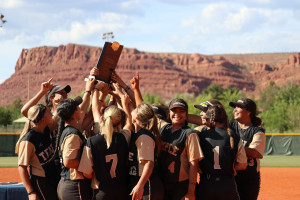 After serving as president of Temple College since 2008, Dr. Glenda O. Barron announced plans to retire from the college at the end of 2018. Highlights of her presidency included the construction of several new buildings on campus and several new student success initiatives.

In late October, the Board of Trustees selected Dr. Christina Ponce to be the 11th president of Temple College. She will start Jan. 2, 2019. Dr. Ponce was selected following a national search that drew more than 70 applicants.

After more than a year of planning, Temple College launched a new mobile app to help students connect with the college from their mobile devices. The app can be downloaded for free from both the iStore or from the Google Play store. The app enables students to register for classes, pay bills, view their class schedules and grades, find buildings on campus and look up important phone numbers.

Inspired by a similar program at Amarillo College, Temple College launched a new initiative to address some of the non-academic issues that can keep students from meeting their educational goals. The initiative formally kicked off in November with a visit from Amarillo College President Dr. Russell Lowery-Hart.

In July, Temple College and the University of Mary Hardin-Baylor signed an articulation agreement that will make it easier for students who complete an associate degree at Temple College to pursue a bachelor’s degree at UMHB.

The Temple College Respiratory Care program received national recognition in 2018 for the percentage of its students who pass an advanced credentialing exam.

Claudia Turner, who teaches in the Associate Degree Nursing program, was among the first recipients of the Dale P. Parnell Distinguished Faculty recognition presented by the American Association of Community Colleges (AACC). Turner also received the 2018 Claudia and W.T. Barnhart Teacher of the Year Award.

Temple College students earned a variety of recognition in 2018: