The Temple College Associate Degree Nursing program is hosting an open house Tuesday, Nov. 13 to mark its 25th anniversary. The open house will run from 4-6 p.m. in the Dell Martin Nursing Education Center.

Tracey Cooper, executive director of nursing, said the event is designed to celebrate the program’s past, present and future. Activities will include tours, demonstrations and refreshments. A slide show of old photos also will be available.

The Temple College Associate Degree Nursing program began in the fall of 1993 with 24 students. Most of the work to get the program started was done by Virginia Leak, who was director of the college’s Licensed Vocational Nursing (LVN) program at the time.

“As director of the LVN program, I became devoted to building new nursing programs at Temple College to complement the LVN program,” recalls Leak, who retired in 2007 after 27 years at the college.

Leak says she approached Temple College administrators in 1990 with a proposal for a program to train registered nurses after hearing requests from the local health care community.

“They (the administrators) supported the idea, and in 1993, it came to fruition,” Leak says. 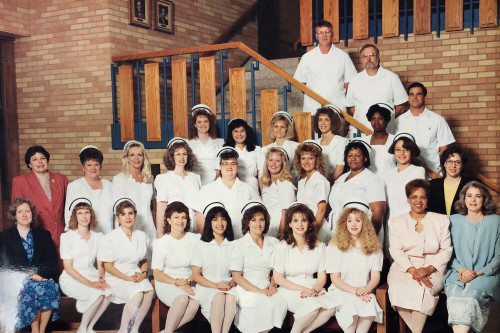 Temple College graduated its first class of Associate Degree Nursing students in 1995.The program’s first graduating class had a 100 percent pass rate on the RN licensure exam known as the NCLEX-RN exam. Soon after the first class graduated, the program was fully accredited by the National League of Nursing Accreditation (NLNAC) and has maintained full approval status for every approval cycle since then. The Texas Higher Education Coordinating Board rated the program as exemplary in 1995.

Leak went on to become director of the new ADN program, and in 1995, she started an LVN to RN Bridging program to help vocational nurses who wanted to further their education and become registered nurses.

Since its inception, the Temple College Associate Degree Nursing program has maintained an outstanding reputation for preparing its graduates to practice as licensed professional nurses, and demand for its graduates continues to be strong. The program currently graduates about 60 students a year.

In 2017, the Temple College Board of Trustees approved the initiation of a five-year ADN expansion project with the goal of doubling the college’s ADN graduates by 2022. Beginning in 2019, the program will start two cohorts of students each year instead of just one.

Discussions are now underway on how to provide additional space for the growing program.

For more information on the program, visit templejc.edu/nursing.