2017 brought many changes both on and around Temple College. Here are some of the highlights from the year.

After completing its first-ever market research project in fall 2016, Temple College decided to redesign its logo to make it more appealing to prospective students. The new logo was introduced in August.

On Aug. 1, Temple College implemented a Campus Carry policy, along with all the other community colleges in Texas.

Construction and demolition projects surrounded the campus much of the year. In January, the Texas Department of Transportation began a project to construct a new signalized interchange at the intersection of 1st Street and Loop 363. In August, the city of Temple completed a project to extend Avenue U from the Olin E. Teague Veterans’ Center to Scott & White Medical Center – Temple. Both projects led to road detours around campus.

In February, the college began demolishing the buildings on an adjacent property it had purchased in 2016 known as the Bandy property. On campus, additional renovations began on the Instructional Services Center.

In April, the Temple College Dental Hygiene program received the 2017 Award of Excellence from the Texas Association of College Technical Educators. The program was recognized for its high licensure rates and high placement rates, as well as its commitment to community outreach.

Temple College’s Associate Degree Nursing program, which will be celebrating its 25th anniversary in 2018, was reaccredited by the Accreditation Commission for Education in Nursing (ACEN). In fall 2017, program director Tracey Cooper was named the new Executive Director of Nursing.

In October, Temple College began offering a new service for its students – career counseling. The counseling is available both in person and online. 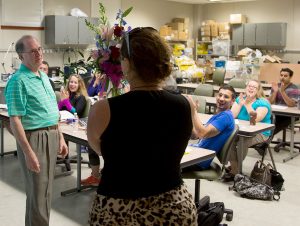 Temple College students earned a variety of recognition in 2017: